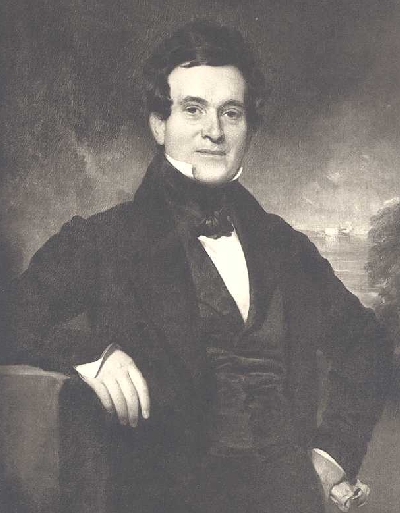 According to his own Family Record, Aaron was born 16 October 1787 in Worthington, MA, son of David Clark and his second wife Lydia Benjamin. Soon after his birth the family removed to Vermont. Aaron was educated at Union College in Schenectady, NY, and later read law. During the War of 1812, he was private secretary to Governor Daniel Tompkins of New York and was also a Brigade Quartermaster in the Militia. He then served for several years as Clerk of the New York State Senate and the State Assembly.

Moving to Manhattan, Clark became a banker and ran a highly successful lottery business, advertising himself as “King of the Lotteries.” He was elected Alderman for the 1st Ward in 1835 and in 1837 was elected to the first of two one-year terms as Mayor of New York — the only Whig to be so elected. By the 1830’s a two-party national political system had arisen. In New York City, bankers, merchants, master craftsmen, and those trades dependent upon commerce united under the Whig Party banner to oppose the local Jacksonian Democrats, popularly known as “Tammany Hall.” Although the New York Democrats also included many bankers and merchants, Tammany denounced the Whigs as “the bank aristocracy” and “the party of the rich”. Tammany dominated city politics by assiduously naturalizing and recruiting the rapidly growing numbers of Irish Catholics, Germans, and other immigrants while the Whigs appealed to American-born workers’ growing resentment of the newcomers.

Rising prices and the financial Panic of 1837 led to an economic depression in the city. In this situation Clark won office against the disunited Democrats. While Mayor, Clark advocated formation of an armed municipal police force and sought to discourage the growing tide of impoverished Europeans pouring into the city. His proposals for curbing immigration would be considered protectionist or xenophobic today: special taxes on immigrants and the favoring of war veterans and their families for welfare and public jobs. He was re-elected for a second one-year term in 1838 but, helped by a brief economic upturn, a reunited Tammany Hall won back the mayoralty in 1839 and kept it for many years. The Whigs remained an important political force in municipal politics for another 15 years. However, after 1854, the Whig Party split into northern and southern factions over the issue of slavery and gradually disintegrated, with most northern Whigs eventually joining the new Republican Party. Prominent Whigs who later became Republicans included Abraham Lincoln and William Seward.

After he was defeated for a third term, Clark devoted himself to banking and insurance interests and became an enthusiastic supporter of Hamilton College, where an annual prize for oratory was established in his honor. Four years of elocution classes are no longer required of all graduates, but the Clark Prize is still awarded.

In Albany on 18 May 1815, he had married Catherine Maria Lamb, daughter of his 1812 colleague General Anthony Lamb. They had six children, five of whom survived their mother’s early death in New York City on 23 April 1832. After having been a widower for almost 30 years, Clark died on 2 August 1861 at his home in Brooklyn. He is buried with Catherine Maria, their daughter Agnes Reid, and several grandchildren in Vault #89 of the New York Marble Cemetery.