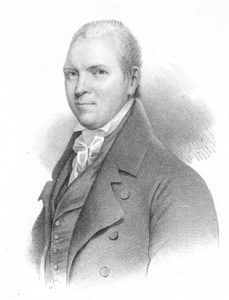 John Mitchel Mason was widely regarded as one of the greatest pulpit orators of his time, delivering many celebrated sermons including a eulogy for Alexander Hamilton and a sharp critique of Thomas Jefferson. He was born in New York City in 1770 and graduated from Columbia College (now Columbia University) at age 19. After studying theology at the University of Edinburgh, he became pastor of the Scotch Presbyterian Church on Cedar Street in NYC after the preceding pastor, his father the Rev. John Mason, died in 1792. He later became pastor of the Murray Street Church.

John Mitchel Mason was present at the deathbed of Alexander Hamilton in 1804; Hamilton asked his friend Mason to come pray with him after being mortally wounded in the duel with Aaron Burr. Mason gave a celebrated eulogy for Alexander Hamilton on July 31st, 1804.

In addition to his pastoral duties, Mason was elected the first provost of Columbia College in 1801 and served as a trustee for 26 years. In 1804 he founded what would later become the Union Theological Seminary, the oldest independent Christian seminary in the US. Also in 1804 he helped found the New-York Historical Society. In his later years he served as President of Dickinson College.

Mason died in December 1829 and was buried in the Eighth Street Church cemetery. Twenty years later he was reinterred in the New York Marble Cemetery in Vault 139, belonging to his sons Abraham and John Lefferts Mason.