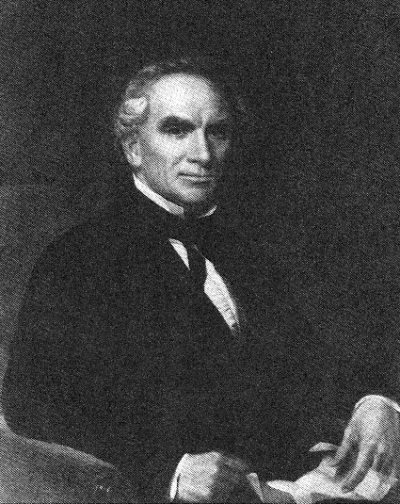 New York University and the New York Marble Cemetery were founded at exactly the same time, so it is not surprising that many people buried in the Cemetery, or owners of vaults there, were instrumental in starting the University.

Among them were the Hon. James Tallmadge and the Rev. Gardiner Spring, both presidents of the NYU Council;

James Brown, a founder of the General Endowment;

James M. Mathews, the first Chancellor; and Mathews’s brother-in-law Myndert Van Schaick. Mathews and Van Schaick were both buried in Vault 156, which had been purchased by their father-in-law, John Hone.

A historical sketch of Van Schaick, written by Dr. Harold deWolf Fuller, © 1926 by the Alumni Federation of NYU, is reprinted here with the permission of the NYU Office of University Archives.

The purposes of the University and its capacity for practical accomplishment are typified in one of the founders who for thirty-five years, until the time of his death, was a member of the University Council.  He saw associates in this body lay down the burden, yet stuck to his appointed task.  When the call to citizens was issued, he was the first to subscribe to the initial funds – a substantial sum.  In the crisis of 1850, when the financial embarrassment of the University threatened complete cessation of activities, it was Myndert Van Schaick who not only suggested a plan of rehabilitation, but assumed the chairmanship of the committee charged with the task.  He was generous with his time as well as with his money.

As his name declares, he came of old Knickerbocker stock.  His father was a distinguished figure in the Revolutionary War, attaining the rank of Brigadier General.  Born in 1782, Myndert Van Schaick had two projects which engrossed his mature years.  He lived to see both well on the way to success.  Without his active service neither would probably have shown great progress in his lifetime.  No praise is too high for such foresight and enterprise.

In the autumn of 1832, when instruction began in New York University, five thousand and fifty-seven persons in the metropolis had died from cholera since the first of July.  Pure water from beyond Manhattan was hawked about by the bucket.  At the time, Myndert Van Schaick was a member of the Board of Aldermen and treasurer of the Board of Health.  “One of my daily duties,” he said years later in reviewing that crisis, “was to look after the dead and dying, and with my associates in the Board of Health to contrive such measures as would stay or remove this pestilence.  Nothing struck us with so much force, so irresistibly indeed, as the conviction that New York must at once, if possible, be supplied with good and wholesome water.”

It was a tremendous project for those days and Mr. Van Schaick was the guiding spirit.  … The first general report by an expert was made by DeWitt Clinton, Jr., late in 1832; the first accurate and scientific observation of the volume of Croton and survey of the route was made by D. B. Douglas, Professor of Engineering in New York University.  He was succeeded in October, 1836, by John B. Jervis, who carried the work through substantially on the same lines.  Mr. Van Schaick’s project was enthusiastically approved by a municipal election held in New York on April 5, 1835.

On June 22, 1842, the Aqueduct received the water from the Croton Reservoir; on June 27 the water entered the receiving reservoirs and on July 4 the distributing reservoir.  On October 14 a great celebration was held.  Ten divisions marched about the fountain in lower Manhattan.  The professors and students of New York University were in the third division, immediately preceded by members of the Bar and followed by representatives of the New York Lyceum, with which latter organization the University was intimately associated.

In 1848 Mr. Van Schaick recommended to the City Council the purchase of one hundred and twenty acres of land for a storage reservoir at what is now Eighty-sixth Street and Central Park.  Ground was broken on April 17, 1858, and on August 19, 1862, the new reservoir was completed.  On each occasion the principal address was made by Myndert Van Schaick…

Public spirit and higher education make a powerful combination.  How strong and active each of these interests was in the mind of Myndert Van Schaick the foregoing sketch has endeavored to make clear.  It has also illustrated, I hope, the kind of practical idealism that went into the founding of New York University.