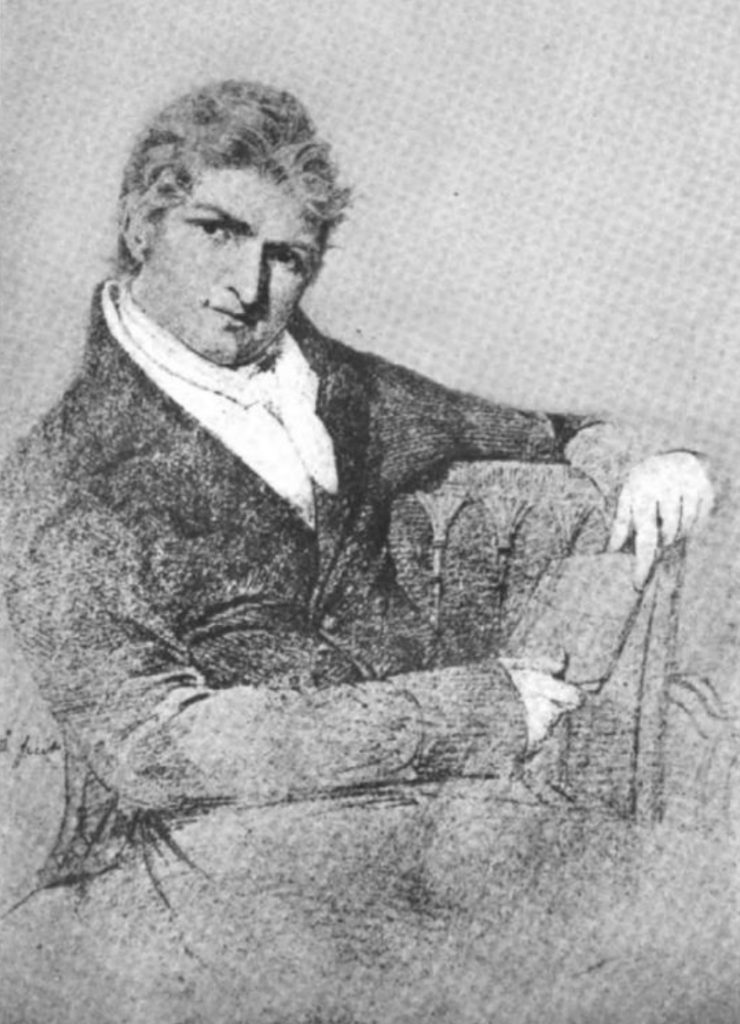 Richard Milford Blatchford was born in Stratfield, Connecticut on April 23, 1798. He was the ninth of 17 children of the Reverend Samuel Blatchford and Alicia Windeatt. In 1804, the family moved to Lansingburgh, New York (near Saratoga), where the Rev. Blatchford took charge of the Presbyterian Church and Lansingburgh Academy in near-by Waterford. In 1805, the Rev. Blatchford became a trustee of Union College in Schenectady and in 1824 he became President of Rensselaer Polytechnic Institute in Troy, New York. Richard received his Bachelor’s degree from Union College in 1815 and, like his father, later served as a Trustee.

Following graduation, Blatchford taught school in Jamaica, Long Island, and at the same time served as a private tutor in the household of Chancellor Robert R. Livingston. While there, he studied law and in the spring of 1819 secured his admission to the bar. In 1822, after having waited the required three years for his admission as an attorney, he passed his examination as a counsellor. The highly prestigious law firm now known as Cravath, Swaine & Moore, traces its historical origins to the 1819 start in New York of Blatchford’s law practice. Shortly after being admitted to the bar, Blatchford married Julia Ann Mumford on May 17, 1819, daughter of a wealthy Schenectady merchant who also had business connections in New York City. Richard and Julia Ann had five children, three of  whom survived him.

Blatchford’s practice grew rapidly, and in 1822 he formed a partnership with a Union College classmate, Ira Clizbe. Blatchford became active as a professional trustee, first for private settlors and the administration of estates, then for corporate purposes, conveying to a trustee security for the benefit of a group of lenders. Known as a person of the highest character and integrity, he developed a substantial business as a trustee in such business transactions. The partnership with Clizbe lasted only four years. During that period, he met Philip Hone, then Mayor of New York, who became a lifelong crony.

In the upstate New York town of Auburn, Elijah Miller retired as a judge and then formed a partnership with young William H. Seward in 1823. Both Blatchford and Seward had graduated from Union College and contended against Andrew Jackson’s Democratic Party, so they had close ties from the early years of their careers. As a backer of John Quincy Adams in the election of 1824, Blatchford’s position as a rising young politician in the City was materially enhanced. His increasing political interest became national in scope and also contributed to his considerable professional success.

In 1826, Blatchford was appointed the financial agent and counsel for the Bank of England in the United States, a position he held for more than 40 years. At about the same time, he became counsel to the Second Bank of the United States. As counsel to the Second Bank of the United States he was in the middle of the political quarrel between Andrew Jackson and his close ties with the Bank’s proponents, Henry Clay, Daniel Webster, leaders of the National Republican party. Anti-Bank Jacksonian Democrats were opposed to the national bank’s re-authorization on the grounds that the institution conferred economic privileges on financial elites, violating U.S. constitutional principles of social equality, and whose charter violated state sovereignty, posing an implicit threat to the Southern states’ agriculture-based economy dependent upon slavery.

Blatchford became a political lieutenant in New York City for William H. Seward, and his state-wide political advisor, Thurlow Weed, in the unsuccessful effort to unseat Jackson in 1832.

The December 1835 fire which destroyed a large swath of lower Manhattan, east of Broad and south of Wall Streets to the East River, had a devastating impact on most of the insurance companies at the time. The panic of 1837 compounded the financial turmoil and forced many state-chartered banks into insolvency, causing a surge in business for Blatchford who, because of his banking experience, was appointed Receiver by the State Bank Commissioner for several state banks.

While still a young man, Blatchford began to invest in New York City real estate and mortgages and to participate in various business ventures. One of Blatchford’s speculative ventures during the 1830s was the Apalachicola Land Company, a claim to approximately 1.200,000 acres in the panhandle of Florida on the Gulf coast, of which he was president and a trustee. Title to the land was legally clouded but the fee title was eventually confirmed by the Supreme Court in the spring of 1837. Complementing his legal work, Blatchford was also something of a promoter of various land and commercial ventures. His investment in, and management of, such ventures probably was the larger part of his income.

In 1845, it was written that Blatchford was worth $200,000 and in 1855 he was said to have made his “fortune” practicing commercial law connected with finance loans and money collecting. Blatchford’s clients included a number of banks and insurance companies. These clients brought both collection work
and real estate work – title searches, loan closings and condemnation proceedings. Mortgages in default sometimes involved reorganization proceedings where the Blatchford-trustee mortgage was exchanged for bonds under a new mortgage as part of a legal settlement.

For Richard Blatchford, political activity was also an inherent and inseparable part of his law business. Political advice and contacts were just as important a service to his commercial, financial and industrial clients as was advising on purely legal problems. The promotion work which came to him from his banking contacts and interests in various investments was furthered by the patent practice of his other law partners and their contacts with inventors and capitalists interested in acquiring patent rights.

After the death of his friends Daniel Webster and Henry Clay in 1852, Blatchford’s interest in national politics subsided. However, he remained politically active at the state level and was elected to the New York State assembly from the 13th district in New York in 1855.

Seward served in the New York State Senate and later as Governor of New York. As a U.S. senator representing New York, he emerged as a major national political figure. With the implosion of the Whig party, he helped found the Republican Party, and in 1856 and 1860 tried in vain to gain his party’s presidential nomination. During the Civil War, Seward served as Lincoln’s Secretary of the State Department. Seward was one of the targets of the conspirators who assassinated President Lincoln, nearly losing his life in April 1865. Among his most famous acts on behalf of the United States during this time was the purchase of Alaska from Russia in 1867, which was mockingly referred to by the American public at the time as “Seward’s Folly.”

During the Panic of 1857, there were nearly 900 mercantile failures in New York, involving aggregate liabilities of over $120,000,000. Both Richard Blatchford and Governor Seward suffered from heavy investments in Illinois Central debentures which went into default. Seward was often pressed financially because his political work took much of his time away from his law practice, while Blatchford could more easily ride out difficult economic periods.

Blatchford’s first wife, Julia Ann Mumford, died in 1857. Blatchford was remarried in 1860 to Angelica Hamilton, granddaughter of Alexander Hamilton. She died in 1868.

During the Civil War, Richard Blatchford was a very active member of the Union Defense Committee, appointed by President Lincoln, which supervised and disbursed large amounts of public money to raise troops for the defense of the Union. In 1862, Blatchford was appointed Ambassador to the Vatican upon
the recommendation of Secretary of State William Seward.

During the park’s construction, Olmsted fought constant battles with the park commissioners, many of them also politicians. In 1860, Olmstead was forced out for the first of many times as Central Park’s superintendent, and Andrew Haswell Green, the former president of New York City’s Board of Education took over as the Commission’s chairman. Despite his having relatively little experience, Green and Blatchford managed to accelerate the construction and, in 1863, finalized the negotiations to purchase an additional 65 acres at the north end of the park, between 106th and 110th Streets. Blatchford’s firm was the Commission’s counsel, handling many legislative problems in Albany and the acquisition of property through voluntary purchases and condemnation proceedings. Between 1860 and 1873, the major hurdles to construction were overcome and the park was substantially completed. In 1870, local control of the
Park was given to the New York City mayor to appoint commissioners.

Blatchford was married for the third time in 1870 at the age of 71 to Catherine Hone, the spinster daughter of his old friend, Phillip Hone. Blatchford was appointed Commissioner of Public Parks in 1872 by the mayor. However, both Blatchford’s physical and mental health began to fail in 1872. Catherine cared for him devotedly in his declining years. By 1874 he was compelled to give up his work on the Park board, which had been his great interest for many years. He died at his residence in Newport, RI on September 4, 1875 at the age of 77 and is buried in Green-Wood.

Very little is known about William Osborn, Blatchford’s co-owner of Vault 13. Osborn was an “extensive” New York merchant, born in 1786, who died in New Orleans of unexplained causes in 1845 at the age of 53. At the time of his death, Osborn was in the employ of wealthy financier and lawyer, Jacob Barker, who had moved from New York to New Orleans in 1834. Perhaps, Osborn fell victim of the Panic of 1837 and got a job from an old friend?

All of the remains of the nine members of the Blatchford or Osborn families buried at the New York Marble Cemetery have been removed to other cemeteries. Osborn’s remains were reinterred at the Union Hill Cemetery in East Hampton, CT along with his wife, Pricilla Abbott Osborn. Vault 13 is empty.

The material in this profile was largely derived from Blatchford’s obituary and The Cravath Firm and its Predecessors 1819-1947 by Robert T. Swaine. The pencil drawing of Blatchford – a copy by Bierstadt – is the frontispiece of the Cravath volume.