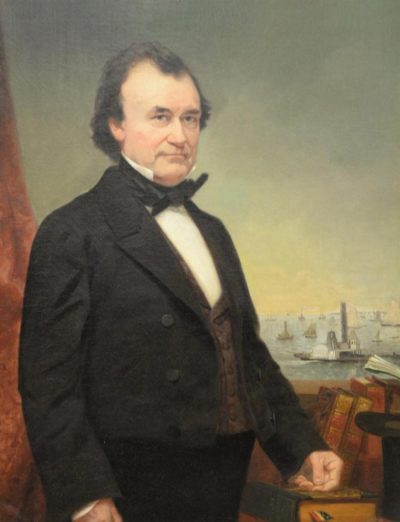 Thomas Tileston was born in Boston on August 13, 1793, the second of 11 children of Lemuel, an indigo merchant, and Mary Minns.  At the age of 13 he secured a position as a printer’s apprentice at the firm of Greenough & Stebbins in Boston at the salary of $30 a year and board.  Under revised ownership, the printing and publishing house, now named Greenough & Burrill, moved the business from Boston to Haverhill in about 1808.

In 1815, Greenough & Burrill, in a precarious condition, was placed under Tileston’s charge. He bought out Mr. Greenough, and the firm was renamed Burrill & Tileston.  Among other activities, they published the newspaper,the Merrimack Intelligencer. With energy and diligence, Tileston was able to discharge its debts and build up a profitable business.

While the editor of the Intelligencer in Haverhill, Tileston became friends with Paul Spofford.  Spofford, after a few years working in a general store, embarked upon what might be termed a barter trade business.  Surplus items such as shoes and boots taken from local manufacturers needed a sales outlet. Other goods were often exchanged in trade.  In the spring of 1818, Spofford, age 26, and Tileston, 24, set out to try their fortunes in New York, selling the goods of Haverhill on commission. Their partnership, “Spofford & Tileston,” built its business and gradually became large shippers of manufactured goods to the South, the West Indies, and South America. Their partnership and friendship of uninterrupted harmony for 46 years earned for them the name of the “Cheeryble Brothers.”

In about 1822, Spofford & Tileston extended their business into shipping by becoming the agents for the Boston & New York line of packets, sloops of one-hundred-twenty-tons capacity. In 1826, their enterprise expanded into the South American and Cuban trade, importing coffee and sugar. For the purposes of this trade, they chartered several sailing vessels and, afterwards, invested in or built a number of schooners, brigs, and two elegant and fast packets, the Havana and Christopher Colon.

In 1840, Tileston was elected President of the Phoenix Bank, a position he held until his death. The Phoenix Bank was in financial disarray when Tileston took over the helm. His “skill, perseverance, and courtesy” put the bank on a sound basis again. As President of Phoenix Bank, Tileston was a leader in forming the New York Clearing House, an innovative idea he adopted over the opposition of nay-sayers. He was elected its first President in 1854 and served until 1859 and again in 1862-1863. During the presidency of Martin Van Buren (1837-1841), Tileston was offered the office of Secretary of the Treasury, which he did not accept.

In 1846, the steamship Southerner was built, and a year later, the Northerner for the Charleston and New York line, transporting freight and passengers. Another steam vessel used for this route, Nashville, was seized in Charleston at the outbreak of the Civil War. Due to its speed, Nashville was able to outrun the blockade of Charleston Harbor and became the first confederate-flag vessel to reach England.

In 1850, Spofford & Tileston became owners of the Dramatic Line of packet ships between Liverpool and New York. The steamship, Eagle, was commissioned for this route and was reportedly unsurpassed in speed and modern improvements for many years. In 1856, Spofford & Tileston had built a steam excursion boat, the Leviathan, which made 23 miles per hour, the greatest speed made by a steam vessel at the time. Over the years, Tileston was continually examining and adopting innovations in marine architecture and machinery so that their steamships might surpass others in speed and size.

Tileston was very social and loved dinner parties, giving a great many, mostly for gentlemen. General Winfield Scott, hero of the Mexican-American war, lived nearby and was a frequent visitor as were other notable men such as Philip Hone and Moses Grinnell.

With the outbreak of the Civil War and the resulting end of the New York- to- Charleston business, renewed attention was given to the trade between Cuba and New York. Setbacks did not unduly discourage Tileston. The panic of 1837 and other periodic economic crises were financial blows,but their upward march was regular and continued. The steady influence and complementary contribution of his long-time business partner, closest friend and perennial next-door neighbor, Paul Spofford, should be noted.

Tileston died of apoplexy (stroke) on February 29, 1864, at his home at 2 East 14th Street. He is buried in vault 38 at the New York Marble Cemetery that he and Paul Spofford bought together in 1831. “His courtesy and frankness of manner were remarkable; his general discretion contributed very largely to his success. Mr. Tileston adorned every station he held in life; he added dignity to the position of a merchant and elevated the character of a banker. As a counsellor, his clear judgment was most valuable; as a friend, he was devoted and reliable.”