A Brief History Of The
New York Marble Cemetery

The cemetery, incorporated in 1831, was the first non-sectarian burial place in New York City open to the public. The organizer was Perkins Nichols, with Anthony Dey and George W. Strong handling the conveyances. Its popularity was so great that another one – the New York City Marble Cemetery – was soon built just around the corner. Although there are many similarities between the two, they have always been independent of each other. The entrance is through two pairs of wrought iron gates in a narrow alley, affording just a glimpse of the grounds, at what was once known as 41½ Second Avenue. The quiet, half-acre site on lower Manhattan was chosen because it was on the northern edge of development and was in an area which already had a number of church cemeteries.

In response to fears about yellow fever outbreaks, recent legislation had outlawed earth graves, so marble vaults the size of small rooms were built ten feet underground in the excavated interior of the block bounded by Second Avenue, Second Street, Third Street and the Bowery. Access to the 156 family vaults was by the removal of stone slabs set below the grade of the lawn. Vaults are in pairs; there are no catacombs or passages connecting them.  Markers were never placed on the ground; instead, marble plaques set into the Cemetery’s long north and south walls give the names of the families interred nearby. 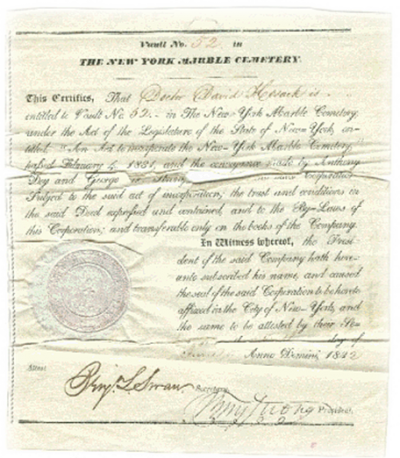 Several of the original owner’s certificates
issued in 1832 still survive.

The first of the 2,000 burials recorded was a child of Dr. Post in 1830, the last, Charles Janeway VanZandt in 1937. Half of the older caskets were tiny, holding children aged six and under. Contagious diseases such as scarlet fever, measles and whooping cough, as well as infections for which there were not yet antibiotics (erysipelas, pneumonia, cholera, etc.) contributed to a level of early mortality fortunately forgotten in most parts of the world. What would be termed symptoms today were then considered primary causes of death: dropsy (edema), congestion or inflammation of the lungs or brain, and dysentery or diarrhœa. For adults, the leading cause of death by far was tuberculosis, then known as consumption or phthisis pulmonalis. A surprising number of people who reached maturity, however, lived into their eighties and nineties, and invariably died of “old age.”One of the walls once held a plaque which noted that this was a “place of interment for gentlemen.” The vault holders, though, did not all start life in well-to-do families, and there was as much new money as old represented. Many were the sons of New England yeomen and several were immigrants, but each had earned an admired place in his business or profession. Among them were American art patron Luman Reed, philanthropist Anson G. Phelps, Uriah Scribner of the publishing family, Mayor Aaron Clark, Congressman James Tallmadge, and Benjamin Wright, Father of American Civil Engineering. Others have names recognized today by anyone travelling through the city, such as Dey, Hoyt, Mott, and Varick.

Some vaults originally required keys but most of them have unfortunately been lost. The locks are rusty and corroded and if necessary when the time comes we would simply break a lock to open it.

Starting in 1838, rural cemeteries quickly became the preference of most New York families. Not only did the next generation provide for its immediate families with plots in these places, but many older remains were moved out of lower Manhattan and reinterred. Removals were from cemeteries that were still functioning as well as churchyards that were being closed down. The Marble Cemetery contributed to this trend, losing over one third of its inhabitants, many of them to Green-Wood in nearby Brooklyn.

The Cemetery is showing its age. Tuckahoe marble from Westchester County, also seen at St. Patrick’s Cathedral, the Century Club, Brooklyn Borough Hall,and the US Capitol, is soft and particularly susceptible to weathering. It was used for the vaults, plaques and lintels and gave the Cemetery its name. Fifty years ago, the deteriorating Dead House was demolished. The masonry work of the distinctive rubble walls is in need of extensive repair, and plans are in place for doing this in stages. The Cemetery has been designated a New York City Landmark and is on the National Register of Historic Places. Because it is a Sec. 501 (c) (13) corporation, all contributions toward restoration are tax deductible.