Host your next big event in a unique downtown venue.

The Cemetery is open at least once a month, April - October. All are welcome to visit.

Explore the cemetery's history through our documents, photos and records.

Your donation will help save history.

Thanks GenExchange for the Genealogical Web Site of Excellence (2000) award.

Thank You Greenwich Village Society for Historic Preservation for giving us your 2014 Village Award.

Read an article about the Cemetery from the Social Register Observer, published in Winter, 2018. 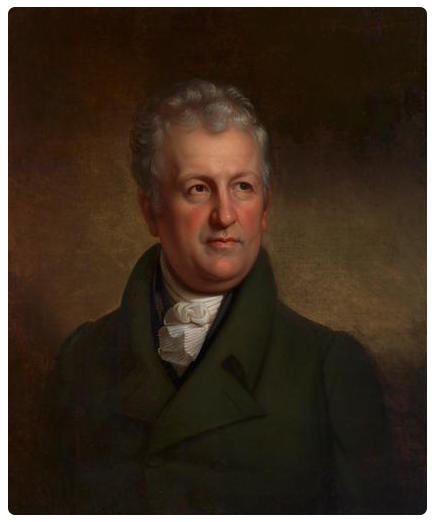 Brian Blakely of Brooklyn, a descendant-owner, visited on May 6, 2012.  Click here to enjoy his short video of the Cemetery on YouTube.

This small burial ground, located at 41 1/2 Second Avenue in Manhattan’s East Village, is sometimes called the Second Avenue Cemetery.  It is the oldest public non-sectarian cemetery in New York City.

Although there are no gravestones, the names of the original owners are on plaques in the surrounding walls.  Their descendants may still be buried here.       (…more)

The painting on the left is by Rembrandt Peale.
Courtesy Museum of the City of New York.

To confuse people through the centuries, two independent cemeteries with similar names were built by the same developer, Perkins Nichols, at Second & Second in 1830.

They were built the same pattern using underground family owned burial vaults, however the (other) New York City Marble Cemetery is twice as large, is covered with large monuments and can be easily seen from the street.  They have separate Boards of Trustees, maintain separate lists of burials and operate independently.